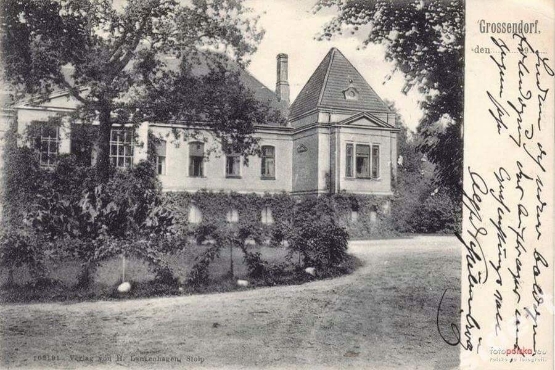 History of the von Mitzlaff

owners of the Großendorf estate

in Landkreis Stolp in Hinternpommern

written by Christina Brigitta Schwerk-von Schwerdtner for her sisters Mechthild, Ega and Angelika

In 1800, Großendorf was purchased by Ernst Gustav von Mitzlaff (1763-1849). The father of thirteen children with Friderike von Braunschweig, he lived in Viatrow an der Lupow, next to Großendorf. He also owned the neighbouring estates of Bewersdorf and Dammen and, obviously, Viatrow and the Dochow farm that belonged to Großendorf.

His eldest son Eugen (born 1802) managed Großendorf since 1832. Ten years later, the manor burned to the ground, but he had it speedily rebuilt, and the external façade, with the low ground floor (to save on heating costs) and the unfinished second tower, remains unchanged to this day. Eugen inherited the estate after his father’s death in 1849.

Eugen's eldest son, Albrecht, was regarded as the next heir, and for this reason he graduated in agriculture in addition to his law studies. But it was Ernst, the youngest, who was destined for a brilliant career in the military. Perhaps for this reason his father deemed him more suitable for the role of a landowner and manager, due to Ernst's better aptitude for interacting with people. The sons, however, were ignorant of their father's plans. When Eugen von Mitzlaff died in 1888, Ernst became the sole heir of the Großendorf estate and Dochow. For Albrecht, this decision was a severe blow, but he bore it manfully. When the will was read, Ernst offered to renounce the inheritance, but Albrecht refused, wishing to obey his father’s commands. The brothers therefore never questioned or fought over the will. Yet because Ernst had only daughters, and Albrecht only sons, the family plight worsened in the next generation. Ernst von Mitzlaff, my great-grandfather, died in 1908 and left the estate to my father, his grandson Achaz von Schwerdtner, just one year old at that time. The provisional heirs (Vorerbe) were obviously Ernst’s three still living daughters. The eldest of them, Ehrengard, married lawyer Nikolaus von Gerlach and entrusted him with taking care of Großendorf. Unfortunately, he knew absolutely nothing about agriculture and managed the estate through incompetent stewards, who sometimes associated with criminals. Nikolaus always believed that the true heir of the estate should have been the first son of Ernst’s eldest daughter, his unborn child. Because Ehrengard could not bear children, the sole heir was my father Achaz. He was adopted by the Gerlachs in 1926 (when he was 19), shortly after the tragic death of his mother Brigitta. In 1929, maintaining the estate was no longer feasible.

At that time, my father was posted on a five year contract with Kalisindikat (a mineral fertilizer trading company) in Shanghai, China, but my grandfather Fritz-Leo von Schwerdtner did everything he could to save the estate from bankruptcy, which he finally managed to do thanks to selling 100 hectares of land and taking on a huge loan. Paying off these debts became the obligation of my parents, who took over the 900 hectares’ estate with the Dochow farm in the spring of 1932, when my father prematurely returned from China. Our parents were married in 1932 in Shanghai. Ernst was born in 1933, I in 1934, Mechthild in 1938, Detlev in 1939, Ega in 1941, and Angelika in 1944.

The first saving measure was leasing the castle for Landjahr camps (a programme of one-year rural training for city youth). Our grandfather kept the first floor of the right wing for himself, and we moved to the steward's house on the other end of the courtyard. The “Big House” became home to 14-year old city girls, who had to spend one year in the countryside working in fields and gardens, engaging in popular dances, sports, crafts, babysitting etc.

Horses played an enormous role in my childhood. Our father gave us our first lessons in horse riding and acrobatics on a big meadow behind the castle. Ernst has got his first own horse for the Christmas of 1942. Soon, parents had a carriage with inflatable tires made for us – we hitched a pony to it and had the grandest trips. Ernst was always driving, especially when his horse was teamed with another brown pony named Panje. Later, we had our own riding competitions around a large oak in the Big House courtyard. One day, I ended up with a broken clavicle and in agonizing pain, because I could not go to a doctor in Stolp until the next day.

Our school was located opposite a big sand hill, just on the other side of a village road. I went there when I was five and was terribly afraid, because all the older children kept talking about school in the worst terms. For all children aged 6 to 14, we had just two forms sharing one room: fifth to eight graders sat on the left, and the youngsters on the right. The room held about 30 pupils; only one side was lectured to at a time, the other doing their lessons in the meantime. Our teacher, Mr Storch, was not too restrained in punishing his charges. But because telling on others was deemed a mortal sin, and you would be looked down upon as a fool if you took the blame on yourself, it was almost always the entire form that got whacked. Girls were caned on the palms of their hands, and boys on their rears. Education was so simple back then.

I stopped going to that school after just three years. My brother Ernst, a year older than me, was bound to enrol in a gymnasium (the nearest one was in Stolp), and because he was a delicate boy, our mother would rather have him home-schooled. We got a teacher to do our fifth grade lessons with, and teased her unmercifully. Our day started with morning exercises; our teacher usually had us running in front of all farm workers who came to the courtyard looking for some work to do. I felt awful, but Ernst took the joke and laughed like everyone else. Today I know that our teacher, who formerly worked abroad, was fluent in Spanish and English. On some days, we were permitted to address her in English only. There was no political indoctrination in her lessons, which was probably why our mother decided to hire her.

Our life was dominated by the agricultural cycle and weather. Christmas was always snowy and gifts for children of farm workers were ready by the morning of the twenty fourth of December. The children recited a poem and received their presents from the oldest to the youngest. We did not see our gifts until the evening, and they were never wrapped. Each of us had their seat at the dining room's big table covered by a white tablecloth. We sang never-ending Christmas carols while our father played the piano. We read the nativity story aloud or recited it from memory. On Christmas day, we went by sled to attend service in Glowitz (Główczyce) We always sat in the gallery on old chairs donated once by the Mitzlaff family, a coat of arms featuring an eagle engraved on their backs.

Our typical day began at 7:00 a.m. with the tolling of bells on the bell tower (the first long building on the village road), calling the workers together with Mr Radtke, the steward, to gather in front of the stables before work commenced. All horses were already fed and cleaned, porker pigs provided for and milk from 80 cows driven to the milk factory in Hebrondamnitz (Damnica). During the day, the bells tolled again at 1 p.m.

Spring was presaged by enormous thaws, ideal for floating toy boats in water. In these parts, the spring season never came quietly, instead it always burst in full power. But when it came at last, it stayed and we could go barefoot and wear summer clothes or short leather trousers. In the fields, spring grain was sown using seeders drawn by horses, potatoes laid down manually, turnips planted, meadows mown with reaping machines, and grass turned by a hay tedder every day and, once dry, loaded on carts and moved to the stables. People were always afraid it would rain. Cereal crops were mowed and bound into sheaves, using binders, left to dry, and later brought to the farm as well. Threshing took place only in winter. In all this work, a major role was played by women.

There was a beautiful custom associated with the harvest. When one of us (of the manorial family) went out into a field, they had a coloured ribbon bound around their left arm, bearing a poem written in the finest Pomeranian dialect, or even standard German, with the recipient’s name bound to appear in the verse and provide a rhyme. This could be done for any guests of the manor and even for us, the children. At other estates, this honour was reserved for the landowner. When the last measure of rye, Pomerania’s most important grain, was harvested, a splendid Altenbier feast was held. The entire estate celebrated in an old barn, used to store sled skids in summer and cart wheels in winter. The workers drank beer and vodka freely, ate delicacies and danced to the sound of concertina and clarinets. Sometimes, my father would fetch his huge accordion and play with others.

During harvest-time, women digged up potatoes and collected them in wire baskets and men later deposited them into huge box wagons. During the war, crops were also gathered by prisoners of war – first Poles, then Frenchmen, Russians and Americans, who lived in a closed-off wing of the stable. My mother insisted they cook their own food. She always brought something from the manorial kitchen to make up for their insufficient rations, getting into trouble with the guard who informed on her. We were not aware what the prisoners did when left alone – all we knew was that the doors were locked from the outside for the night and that no prisoner ever escaped. Mother talked to them, although it was strictly forbidden, treated their wounds and otherwise helped them to recover. The prisoners were simply part of our estate – we saw it in no other way, because almost all our hands worked in the fields.

We always had four female servants in the manor: the housekeeper or cook, her assistant, the governess and the nanny. A major role on our farm was played by geese and everything geese-related. All farm workers kept geese and could graze them on land belonging to the estate, but every tenth goose – and in some villages every seventh – had to go to the manor. Goose meat dishes, especially smoked goose breast, were important. Each woman in the estate had her own recipe how to do the smoking. This Arcadian age and our childhood ended on 12 February 1945. We fled to Saxony, where we learned that our father was killed on 10 March close to Saldus, Latvia, in an air raid by Rusian bombers. I am still at a loss to understand how our mother, following such short and blissful marriage, managed to withstand this blow of fate which left her alone with six children aged from less than a year to 11 years and no homeland. She was a great woman.